There are two things we need to mention when communicating about assets.

We chose to impact your app, and your deploy processes as little as possible. That's why we bundle up Avo's assets when we publish on rubygems, so you don't have to do anything else when you deploy your app. Avo doesn't require a NodeJS, or any kind of any other special environment in your deploy process.

Under the hood Avo uses TailwindCSS 3.0 with the JIT engine and bundles the assets using jsbundling with esbuild.

Avo makes it easy to use your own styles and javascript through your already set up asset pipeline. It just hooks on to it to inject the new assets to be used in Avo.

We use TailwindCSS 3.0 with the JIT engine to style Avo, so on release we only pack the used Tailwind classes in our final css file. That's why, when you want to style your custom content (tools, resource tools, fields, or ejected partials), you won't have access to all of Tailwind's utility classes. It's a performance optimization.

But there's an easy way to overcome that limitation. You can add your own TailwindCSS process to watch for your the utility classes you use.

To do that, you need to run the bin/rails generate avo:tailwindcss:install command. That will:

Now, instead of running bin/rails server, you can run that Procfile with bin/dev or foreman start -f Procfile.dev.

You mileage may vary when running these tasks depending with your setup. The gist is that you need to run avo:tailwindcss:build to compile the css file and avo:tailwindcss:watch to watch for changes in development.

Inside app/assets/stylesheets you'll have a new avo.tailwind.css file that's waiting for you to customize. The default tailwind.config.js file should have the proper paths set up for purging and should be ready to go.

There are more ways of dealing with JS assets, and Avo handles that well.

Use Importmap to add your assets #

Importmap has become the default way of dealing with assets in Rails 7. For you to start using custom JS assets with Avo and importmap you should run this install command bin/rails generate avo:js:install. That will:

js-bundling gives you a bit more flexibility and power when it comes to assets. We use that under the hood and we'll use it to expose your custom JS assets.

When you install js-bundling with esbuild you get this npm script "build": esbuild app/javascript/*.* --bundle --sourcemap --outdir=app/assets/builds --public-path=assets. That script will take all your JS entrypoint files under app/javascript and bundle them under assets/builds.

To take advantage of that you can run bin/rails generate avo:js:install --bundler esbuild. That will:

That will be picked up by the build script and create it's own assets/builds/avo.custom.js file that will, in turn, be picked up by sprockets or propshaft and loaded into your app.

Use js-bundling with rollup or webpack #

Avo supports the other bundlers too but we just don't have a generator command to configure them for you. If you use the other bundlers and have configured them to use custom assets, then please open up a PR and help the community get started faster.

You should add your custom styles to _pre_head.html.erb, versus _head.html.erb to avoid overriding Avo's default styles. This

The order in which Avo loads the partials and asset files is this one: 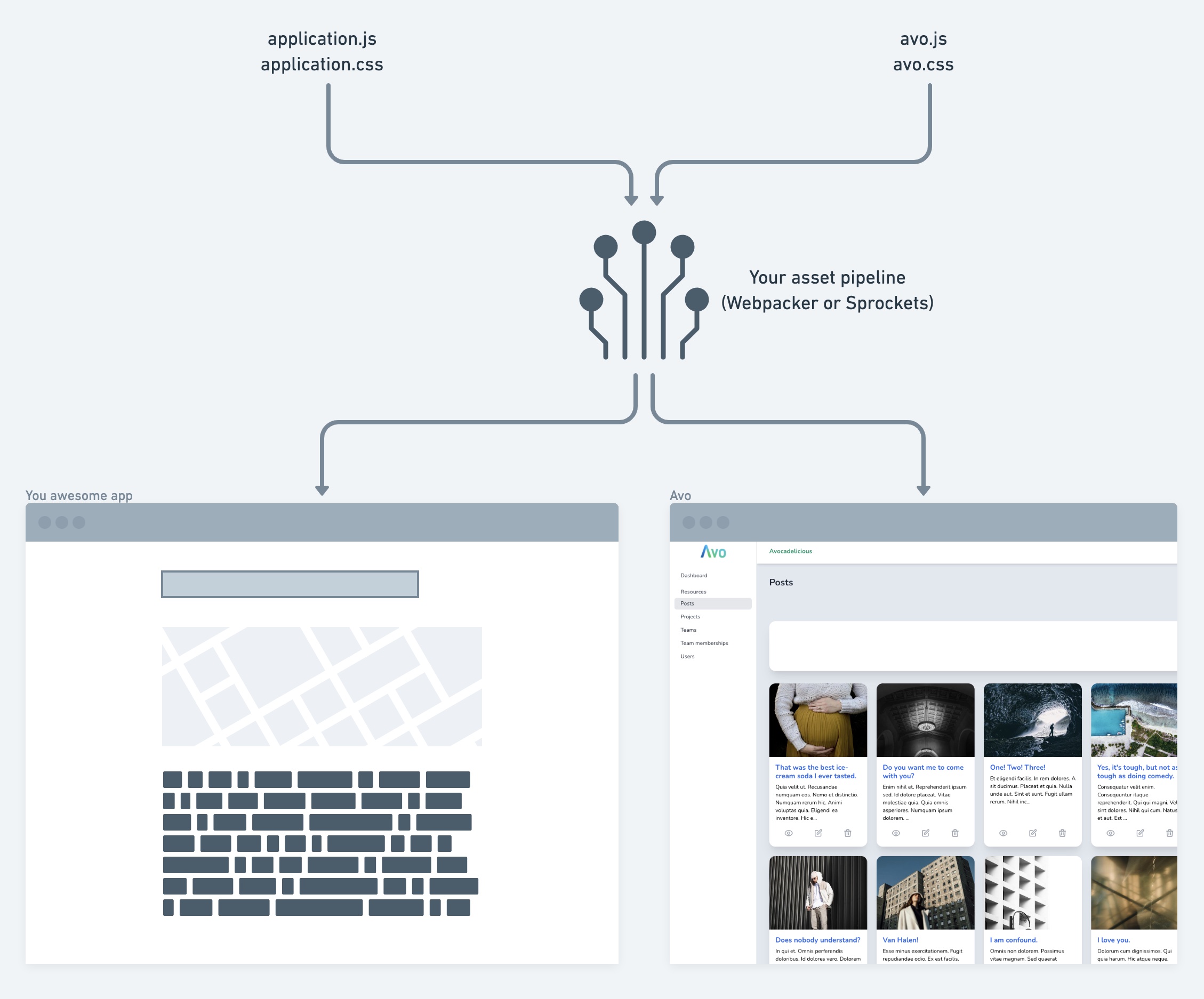 We removed support for webpacker. In order to use Avo with your assets you must install Sprockets or Propshaft in order to serve assets like SVG, CSS, or JS files.

Instructions below are for Webpacker version 6. Version 5 has different paths (app/javascript/packs).